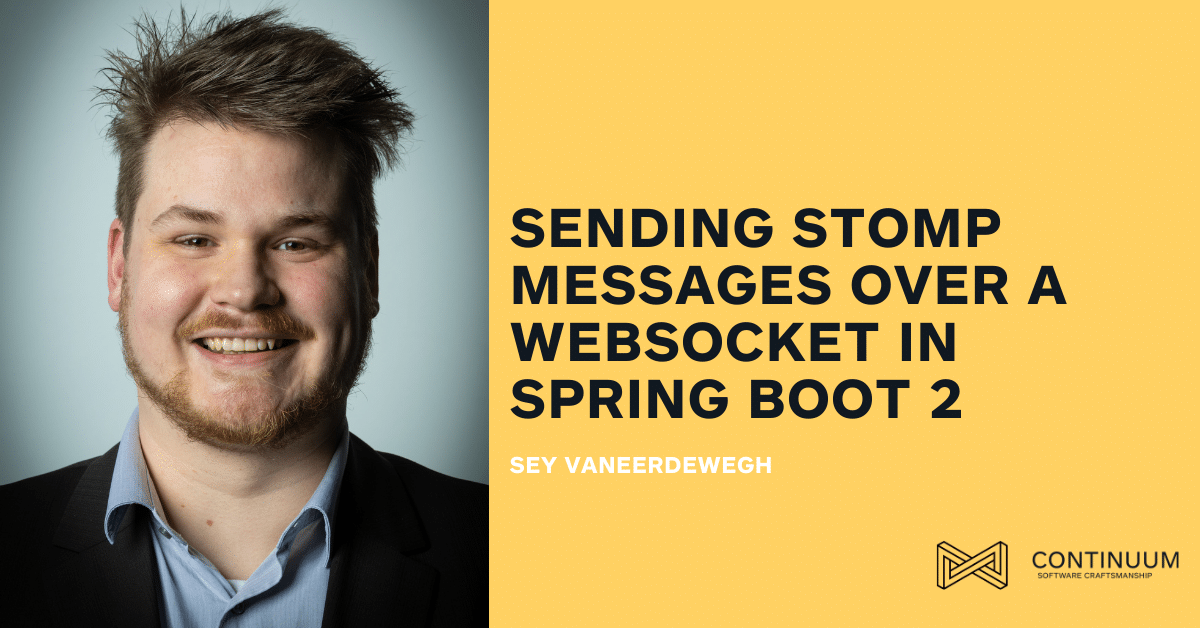 Sending STOMP messages over a WebSocket in Spring Boot 2

In this blog, we will have a look at how to set up an application to send and receive STOMP messages over a WebSocket connection. Spring Boot 2 will be used as it contains support for STOMP and WebSocket, and it provides a simple message broker as well.

Before we dive into the examples, let us elaborate a bit more about the concepts mentioned above.

According to the WebSocket RFC, the WebSocket protocol enables two-way communication between a client running untrusted code in a controlled environment to a remote host that has opted-in to communications from that code. So, what does this statement mean? In short, WebSockets creates a connection between client and server which allows sending messages back and forth between client and server without having to reopen the connection or using long-polling for updates from the server.

So once the WebSocket connection is established, it remains open and allows data to be transferred. This is a major benefit of a WebSocket over a traditional HTTP request, which needs to reopen the connection and send a bunch of headers and cookie data to successfully complete the request, this overhead is reduced and even eliminated.

Data is transferred through a WebSocket as messages containing the payload, which consists of one or more frames. A frame consists of a header and body, of which the header describes the frame and application data in the body. The frame-based system reduces the non-payload data to a minimum and significantly reduces latency, thus allowing the transfer of data in a very fast and reliable way. This  keeps things running smoothly in a fast paced environment.

To set up a WebSocket connection, a traditional HTTP request is sent to the server containing an “Upgrade” header. If the server supports the protocol, it performs the upgrade by adding an “Upgrade” header in the response. As a consequence, the socket is now opened and allows for “real-time” communication between client and server. Note that after this handshake, the initial HTTP connection is replaced with a WebSocket connection. WebSocket URLS use the ws scheme and the wss scheme for regular and secure connections, respectively.

The machine in the middle: a Message broker

A message broker is an architecture pattern that mediates communication between applications.

The most simple visualization of a message broker is the central nervous system, connecting subsystems together on one big network. The message broker is responsible for receiving and sending messages, routing them to the correct destination and translating messages between standard messaging protocols, more on this later.

Most known implementations of a message broker are Apache Kafka and RabbitMQ. More resources can be found at the end of this blog.

WebSocket is a messaging architecture that does not mandate any specific messaging protocol. It transforms a stream of bytes into a stream of messages. The application itself needs to interpret the meaning of each message. For this reason, the WebSocket RFC defines the use of sub-protocols, allowing applications to choose a message format that both client and server will understand. This format can be custom, framework-specific, or a standard messaging protocol.

One example of a standard messaging protocol is STOMP. STOMP stands for Simple (or Streaming) Text Orientated Messaging Protocol. It provides an interoperable wire format in order to enable clients to communicate with message brokers,  as long as they both understand STOMP. Using STOMP thus allows widespread messaging among many languages, platforms and brokers.

STOMP defines a handful of frame types that map to WebSocket frames:

We will use Spring Boot 2 to expose STOMP endpoints for the WebSocket handshake and to send and receive the messages on. Spring’s simple message broker will be used to handle encoding and decoding the messages and managing client subscriptions.

To use Spring Framework’s Websocket support, the Spring Boot starter can be included in the project.

We’ll quickly break down the code-snippet above:

registerStompEndpoints allows the configuration of the HTTP URL as the endpoint for the WebSocket handshake. Hence, an endpoint /websocketdemo will be made available for the client to send a HTTP request to upgrade the connection to a WebSocket connection.

configureMessageBroker is configured to allow for two things to happen:

In the example above a simple broker is configured. To configure an external broker, refer to the Spring Framework documentation.

The controller in the code snippet above has the following functions:

Note that all response routing is done with annotations. When desired, the Spring provided SimpMessagingTemplate can be used to send messages to connected clients from anywhere in the application.

A stream of messages

The following diagram demonstrates the flow of messages in the application using the simple built-in broker from the code snippet in the previous section. Image credits: Spring framework documentation

When messages are received over the WebSocket connection, they are decoded to STOMP frames and transformed into Spring-message-representations. These Spring messages are then sent to the channel for further processing.

In the described example configuration of  the Spring application, STOMP messages sent to the destinations “/topic” and “/queue” are routed directly to the message broker, while “/app“ messages may be routed to the service to be handled by the controllers.

The controller method mapped via the @MessageMapping annotation is invoked, will process the payload of the Spring message and respond by sending a Spring message to the SimpleBroker via the broker channel to the connected clients on the topic and queue destinations. The SimpleBroker will make sure the correct subscription(s) will receive the message, based on the destination the message was sent to.

After a WebSocket connection is established by the client by sending a HTTP request with “Upgrade” header to http://localhost:8080/websocketdemo, any of the following examples is supported by the implementation in the application described in the previous section.

Example: Client sends a message to the service, the service broadcasts a reply to all subscribed clients, including the original sender.

Alternative example: Client sends a message to the service, which will reply only to the original sender over the WebSocket connection.

We hope this blog provides sufficient information to get started with configuring your own WebSocket connections, transforming your messages to STOMP and handling messages with Spring Boot 2.

More information can be found using the following resources:

Spring Boot With WebSocket and STOMP

Sey Vaneerdewegh is an enthusiastic JAVA software crafter at Continuum Consulting NV with experience in Java and JavaScript.  Sey is passionate about software architecture, automatization and continuous learning and improvement.

He is currently working as a consultant – full stack developer at TrendMiner (Hasselt, Belgium), a company, where he focuses on development within the Spring Framework Ecosystem.